How to determine the rarity of your Pokemon cards. Learn about the three rarity symbols and the many variations of Ultra and Secret Rare cards.

This article tells you how to determine a Pokemon card’s rarity, and therefor value. We’ll cover the 3 rarity symbols and how to identify the many variations of Ultra and Secret Rare cards.

There are only 3 Rarity Symbols!

Every Pokemon card has a rarity symbol (with exceptions… like Promo cards). The symbol is found at the bottom of the card… next to the set symbol and card number. There are 3 rarity symbols:

There are some cards that have no rarity symbol. Usually these are from a Promo set (indicated by the set symbol ). 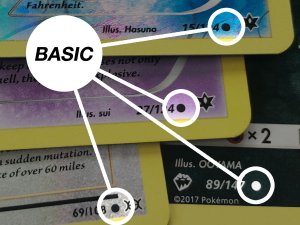 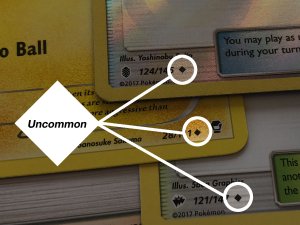 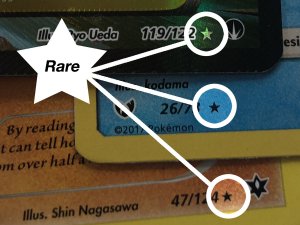 Not all cards with the rare symbol are equally rare! Some rare cards are more rare than others. They all have the star symbol, but other characteristics of the card such as holofoil vs non-holofiol or cards with special abilities can make it more rare and more valuable.

Perhaps an easier way to find valuable Pokemon cards is to look for “holo” cards… these are also called holofoil, holographic, shiny, or foil cards. There are several types of holo Pokemon cards:

Ultra Rare cards have the star symbol, but they also have some extra powers or unique game mechanic. The following are considered Ultra Rare:

Secret Rare cards have the star symbol, but are unique in their numbering… they always have a card number that is beyond the standard set. For example, this Secret Rare card is numbered 112/111. 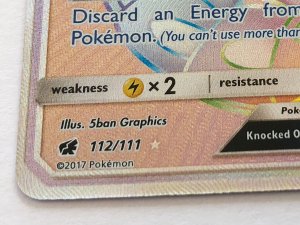